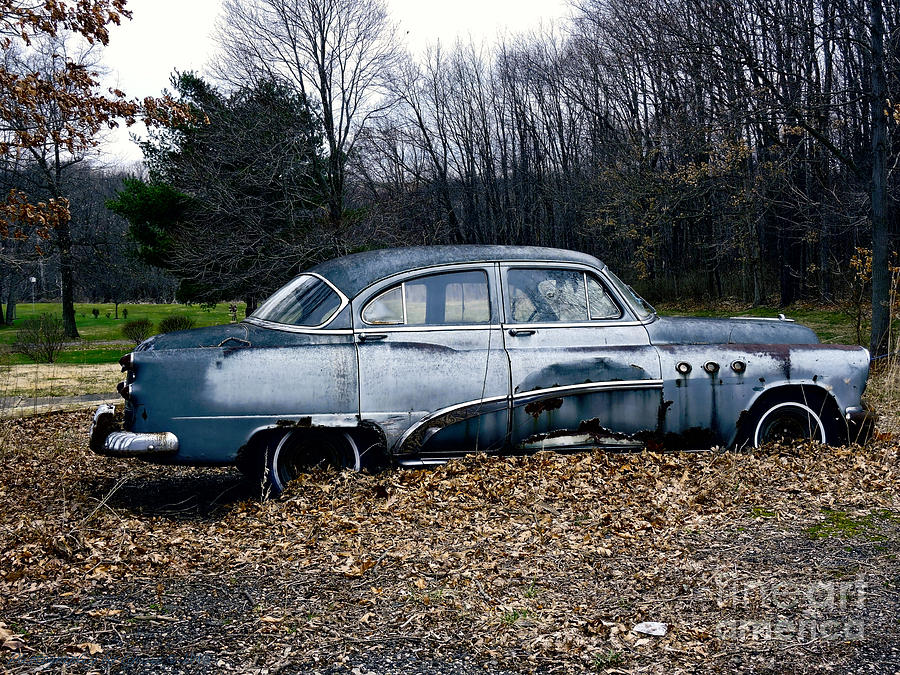 For anyone who is looking for that perfect gift for the car enthusiast; here it is. This is a digitally enhanced photograph of a 1949 Buick Roadmaster. I found this car one day abandoned behind a garage in a total state of neglect.

As I understand the story that goes with this car; it belonged to a gentleman many years ago. He received it as a trade for another vehicle he had. Once he received the car, he parked it behind the garage and drove it, maybe; two or three times. After that he let it sit behind the garage as a forgotten about toy. He died several years later and it has been sitting there ever since.

This particular model is the fifth generation of the Roadmaster name in 1949. It was the first of the �four-hole� Buicks of its era. This is the brand�s trademark, �ventiports� placed on the front fenders. The ports at first provided ventilation for the engine compartment, but they were soon plugged and used as visual cues only.
The Roadmaster had an overhead-valve engine, with 263 cid that delivered 152 hp. They came with a 2-speed Dynaflow automatic transmission as standard equipment. The Buick lesser models came with 3-speed manual transmission.

The Buick Roadmaster styles included a 4-door sedan, a 2-door sedanette, a 2-door hardtop coupe, a 4-door station wagon, and a convertible. Today, the most desirable of the styles is the convertible. There were only 8,000 produced and the interiors are tonier than other body styles, giving them both luxury and rarity.

As for myself, I have never thought of owning an older car and fixing it up. But, walking around this car and taking photographs, gave me the insight as to why some people choose to own one and show it off.