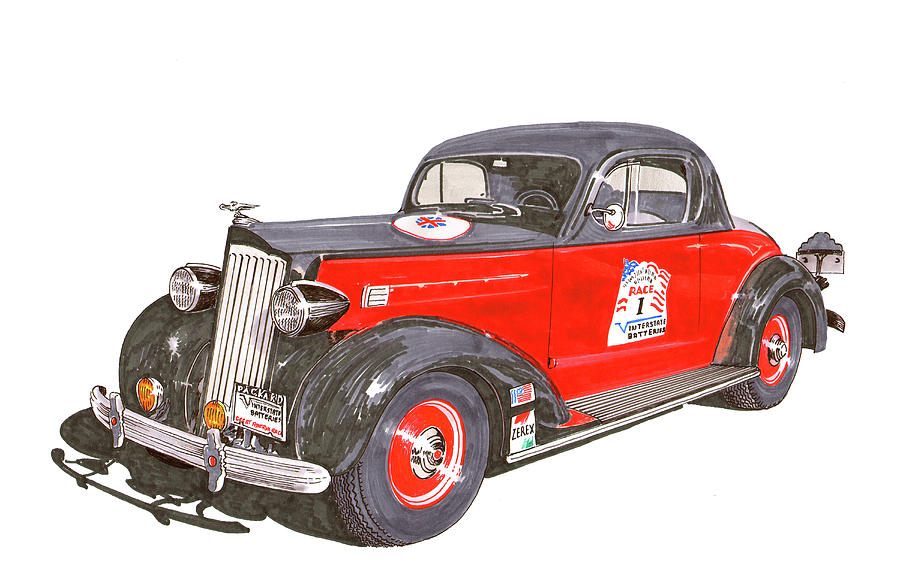 watercolor painting of a 1936 Packard 120 B Coupe, the Great Race was organized by Texans Tom McRae and Interstate Batteries chairman Norm Miller. It was named for, and partially inspired by, the 1965 movie of the same name. The rights to the race were purchased from Howard Williams of Oklahoma City, OK in the early 80's. Williams had earlier organized a race with two reproduction Stutz Bearcats in 1971. An inaugural race was held that year from Tulsa, Oklahoma to Indianapolis for the Memorial Day 500 race event. The first of its kind event, was sponsored by Tulsa-based Sunoco/DX, along with Goodyear Tires and Tulsa radio station KRMG. Coincidentally, the Sunoco sponsored car won the Indianapolis 500 that year.

Interstate Batteries first race was held in 1983, it is an annual event held over a 14-day period. The course usually runs from east-to-west or west-to-east on a 4000-mile journey across the continental United States. The course typically avoids large cities, instead winding along secondary highways and back roads through small towns in America's heartland. While the towns that the course will run through are publicized in advance, the actual route itself is kept secret from the drivers and navigators. Each year, race organizers give the "Great American City" award to the town along the route with the most receptive audience. The race tends to be a festive and patriotic affair, with the streets lined with flags and marching bands playing.

Thank you, most of the cars in this race are non-stock painted.