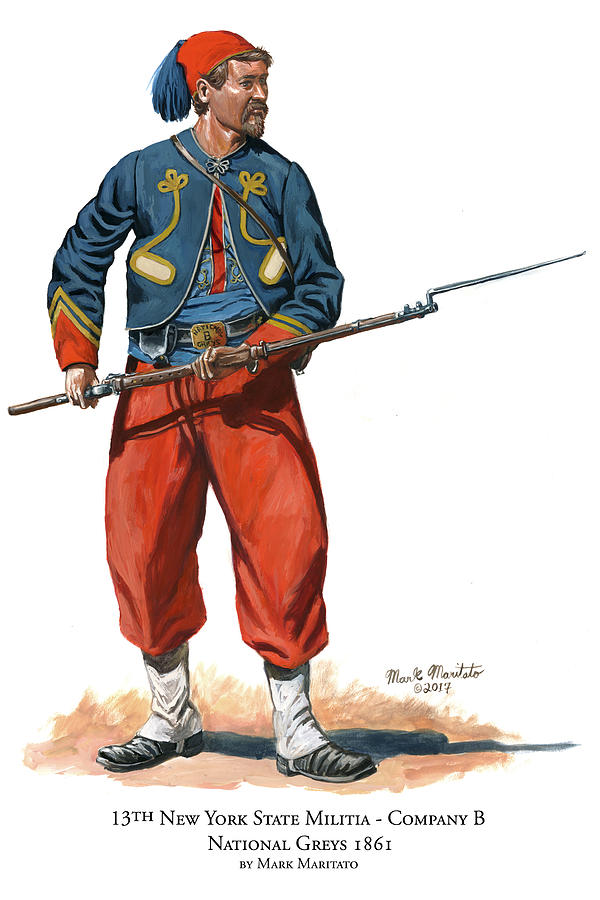 Here we have a new watercolor and gouache study of a soldier of Company B of the 13th New York State Militia (Civil War) as he appeared in early 1861. The 13th New York State Militia was uniformed in state regulation Grey uniforms with black trim and flashings similar to that worn by the famous 7th Regiment. However, following the "Zouave Craze" of the mid-late 1850's, Many units such as the 13th early in the conflict would outfit one or more companies in a Zouave uniform of their own design. Such was the case with the 13th Militia Company B as the one illustrated here. This reconstruction is based on a contemporary photograph and Illustration as well as a surviving uniform now housed in the collection of the museum of the city of New York.

Service in the War of the Rebellion.
The regiment (eight companies) left the State April 23, 1861, Col. Abel Smith in command, en route to Washington, D. C. It was mustered in the service of the United States for three months; served as infantry at Annapolis and Baltimore, Md., and was mustered out August 6, 1861, at Brooklyn.
In December, 1861, quite a portion of the regiment entered the volunteer service for three years as members of an organization which received the State designation 87th Volunteers.
May 26, 1862, the regiment was again ordered to Washington, D. C.; it left the State May 30, 1862, commanded by Col. Robert B. Clark; was mustered in the United States service for three months, May 28th; served at Suffolk, Va., as part of the 7th Corps, and was mustered out at Brooklyn, September 12, 1862.
June 18, 1863, the regiment, then commanded by Col. John B. Woodward, was ordered to Harrisburg, Pa., and it left the State June 20, 1863, to serve thirty days. It served as infantry in the 2d Brigade, 1st Division, Department Susquehanna, and was mustered out of the United States service July 21, 1863, at Brooklyn.
The regiment lost in its service in 1861, died of disease, 5 enlisted men; in that of 1862, died of disease, I, and of accident, i enlisted man; in that of 1863, died of disease 1 enlisted man, total 8; and it took part in the following engagements, etc.:
Near the Light-house at Smith's Point, Chesapeake Bay, Md., May 18, 1861, and near Fort Washington, Pa., July 2, 1863.