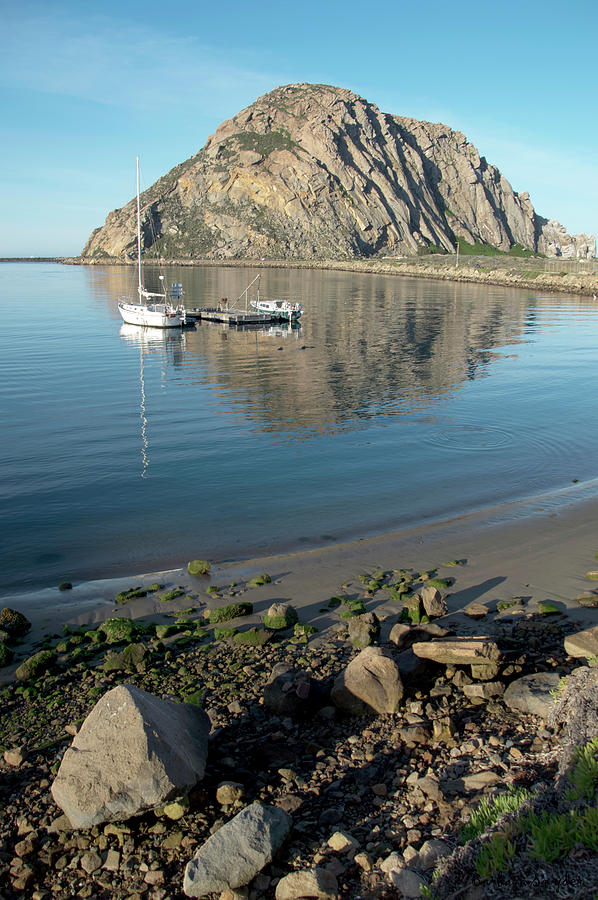 This item is also available as a Digital Painting and as a Duvet Cover. Search in my fasgallery.com for the same title.

Morro Rock located in Morro Bay, California is the most famous of the Nine Sisters, a string of extinct volcano peaks, referred to as volcano plugs, that run through San Luis Obispo country. Many construction projects mined the rock itself for use in building the breakwater of Morro Bay and Port San Luis Obispo and the famous Bixby Bridge on well traveled Highway One.
In 1963 the blasting was stopped and in 1966 the title to the rock was transferred to the State of California. Both the City of Morro Bay and the Country of San Luis Obispo have had it declared a California Registered Historical Landmark and it is now a designated bird sanctuary for the Peregrine Falcon and other sea birds.
The rock got its name "El Morro" in 1542 by Portuguese Explorer Juan Rodriquez Cabrillo and it is said to be 23 million years old. The rock stands 576 feet tall and has been a navigational aid for mariners for over 300 years.
It is often referred to as the "Gibraltar of the Pacific" and is the last of the nine peaks that extends from the city of San Luis Obispo to Morro Bay. You can count all nine of these peaks as you make the drive from San Luis Obispo to Morro Bay.
Another one of the peaks was made famous when local contractor and restaurant owner Alex Madonna was trying to develop a project on the peak located near his famous restaurant and hotel, The Madonna Inn. The Madonna Inn itself is also a famous stop for tourist traveling up the coast. The New York Times called the Madonna Inn a fantasy themed hotel of excesses and charm.