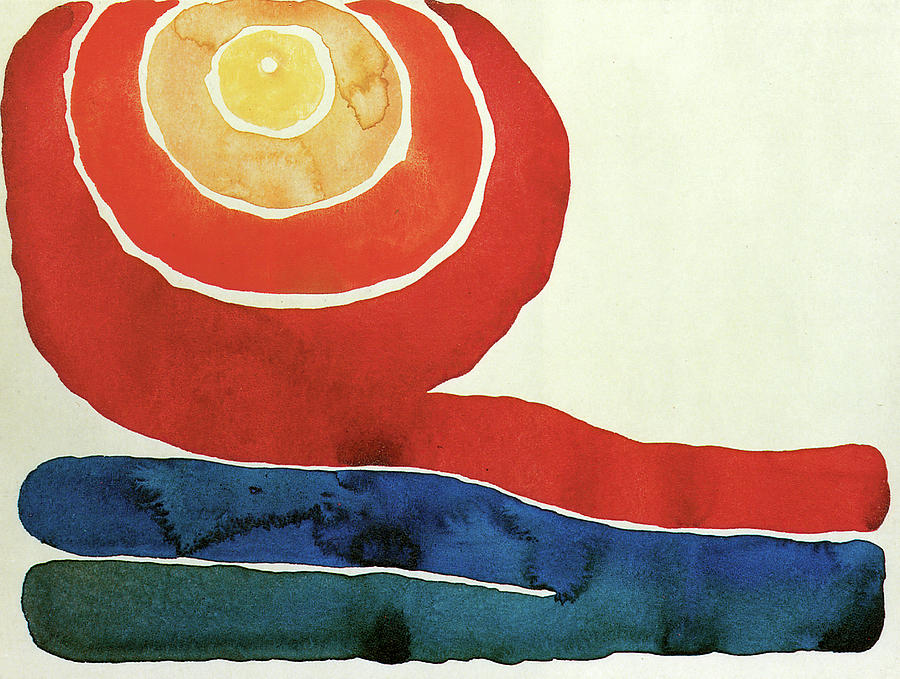 Born in Sun Prairie, Wisconsin, Georgia O'Keeffe studied at the Art Institute of Chicago (1905) and the Art Students League in New York City (1907-1908). She worked briefly as a commercial artist in Chicago, and in 1912 she became interested in the principles of Oriental design. After working as a public school art supervisor in Amarillo, Texas (1912-1914), she attended art classes conducted by Arthur Wesley Dow at Columbia University. She instituted Dow's system of art education, based on recurring themes in Oriental art, in her teacher-training courses at West Texas State Normal College, where she served as department head (1916-1918).

In 1916 Alfred Stieglitz, the well-known New York photographer and proponent of modernism, exhibited some of Georgia O'Keeffe's abstract drawings. In 1924 O'Keeffe and Stieglitz were married.

Lake George, Coat and Red (1919), a salient example of O'Keeffe's early abstract style, was a roughly brushed composition in which a twisted, enigmatic form looms against a rainbow-hued sky. Early in her career she developed a personal, extremely refined style, favoring inherently abstract subject matter such as flower details and austere architectural themes. Many of her paintings were dramatic, sharp-focus enlargements of botanical details.

Though O'Keeffe insisted that there was no symbolism behind her work, art critics continue to speculate about the sexual imagery in such paintings as Black Iris (1926) and Jack in the Pulpit No. 6 (1930). Indeed, this generative tension underlying her botanical paintings accounts for much of their force and mystery, and these images exalting life and energy were among her most optimistic and successful.

Between 1926 and 1929 O'Keeffe painted a group of views of New York City. New York Night (1929) transformed skyscrapers into patterned, glittering structures that deny their volume. More architecturally characteristic were such paintings as Lake George Barns (1926) and Ranchos Church, Taos (1929). These simple buildings, further simplified in her painting, were America's anonymous folk architecture; in these forms O'Keeffe found a permanence and tranquility that contrasted with the frenetic urban environment.

In 1929 O'Keeffe began spending time in New Mexico; that region's dramatic mesas, ancient Spanish architecture, vegetation, and desiccated terrain became her constant themes. Total clarity characterizes her elemental vistas, and her subjects existed in self-contained worlds. Even her allegories of death in the desert�a sunbleached skull lying in the sand or affixed to a post (as in Cow's Skull with Red, 1936)�were eternalized. She regarded these whitened relics as symbols of the desert, nothing more. "To me, they are strangely more living than the animals walking around�hair, eyes and all, with their tails switching." The dried animal bones and wooden crucifixes of the region which loom in her desert (Black Cross, New Mexico, 1929) were disquieting apparitions.

In 1945 O'Keeffe bought an old adobe house in New Mexico; she moved there after her husband's death in 1946. The house served as a frequent subject. In paintings such as Black Patio Door (1955) and Patio with Cloud (1956) details of doors, windows, and walls were radically reduced to virtually unmodified planes of color.

Many of O'Keeffe's paintings of the 1960s, large-scale patterns of clouds and landscapes seen from the air, reflected a romanticized view of nature evocative of her early themes. It Was Blue and Green (1960) used more impressionistic color, and the painting technique was looser, with less reliance on sharp contours. These large paintings culminated in a 24-foot mural on canvas, Sky above Clouds IV (1965). Her paintings of the 1970s were intense, powerful renditions of a black cock.

A portrayal of O'Keefe, In Cahoots with Coyote from Terry Tempest Williams' 1994 book An Unspoken Hunger, painted a vivid narrative of the artist's entrancement with her beloved New Mexico she first visited in 1917.

"I simply paint what I see," O'Keefe is quoted as saying, from O'Keefe's own essays published in Georgia O'Keefe in 1987.

But, narrated Williams, her search for the ideal color, light, stones, parched bones that contained more life in them than living animals, transformed her forays into desert country into a communion with the perfection around her. Once, in a canyon bottom, she was so enthralled by the sight that she laid her head back Coyote-fashion and howled at the sky, terrifying her companions nearby who feared she was injured. "I can't help it�it's all so beautiful," was her response.

Another, well-known story related by Williams was of O'Keefe purloining a perfectly shaped, totally black stone she coveted from the coffee table of friends. They had found it at a canyon riverbed during a search for stones moments before O'Keefe arrived at the spot, but kept it tantalizingly out of her reach. Obsessed with the stone and seeing it on the table for her to steal if she wanted, she had no doubt she was the rightful possessor of such beauty.

O'Keefe's boldly original American works encompassed a wide vision from taut city towers to desertscapes in such vivid hues and form "as to startle the senses," according to the narrative. O'Keeffe painted until a few weeks before her death. She died on March 6, 1986, less than a year short of turning 100.

Many of her works found a permanent home among the abode buildings of Sante Fe, New Mexico. The Georgia O'Keefe Museum, designed by New York architect Richard Gluckman, opened in 1997 to hold more of her pastels, drawings, paintings and sculpture than any other museum.