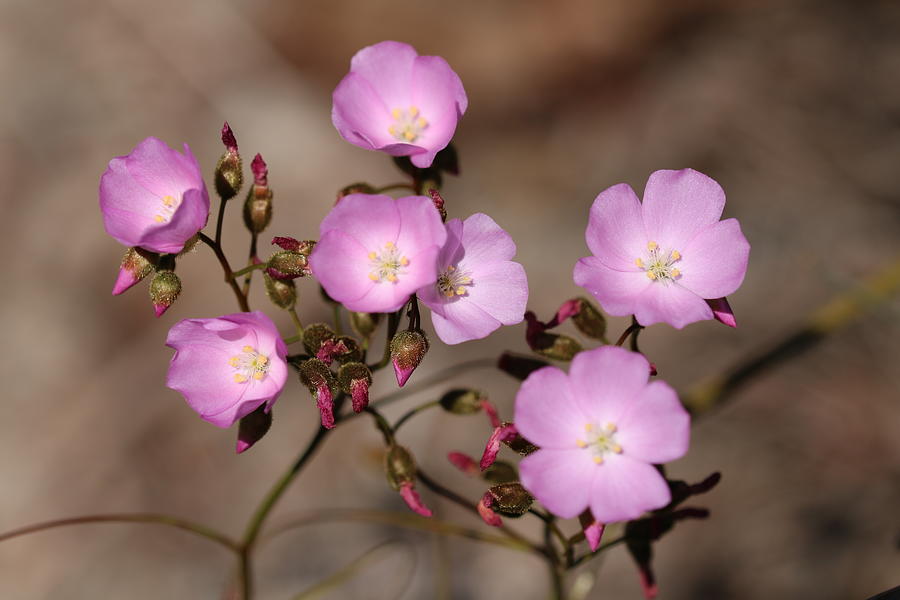 Drosera menziesii, the pink rainbow, is an erect or scram-bling perennial tuberous species in the carnivorous plant genus Drosera. It is endemic to Western Australia and grows in a variety of habitats, including winter-wet depressions, swamps, and granite outcrops in clay or peat sand soils or loam.

D. menziesii produces small, circular carnivorous leaves along an undulating erect stem that can be .05–1.1 m (0.2–3.6 ft) high. Its pink flowers emerge from July to November.

Drosera menziesii was first mentioned by Robert Brown and then formally described by Augustin Pyramus de Candolle in 1824. A type specimen (B 100294474) collected by Georgiana Molloy at Vasse River is held in the Herbarium Berolinense, Berlin (B).

Meaning of name: Drosera is from the Greek word droseros, meaning dewy. It refers to the prominent glandular hairs which give the appearance of being covered in dew. Menziesii is named after Archibald Menzies, surgeon-naturalist on the Discovery expedition (1791 – 1795) under the navigator George Vancouver.

Distribution: Occurs from north of Perth to east of Esperance.

Description: An erect plant to 25 centimetres which can use other plants for support. The pink flowers are borne from August to November.

Notes: Drosera are carnivorous and supplement their diet by trapping and digesting insects. The insects are caught on the sticky leaf surfaces and digested by enzymes produced by the plant.

Please note FAA watermark does not appear on purchased products

So beautiful! When I was a kid in Chicago, I was fascinated with insectivorous plants, grew them in a terrarium made out of a fish tank but never got my Drosera to bloom.

I really like these plants, saw some white ones today

Thank you Randy, much appreciated

Lovely shot of these pretty flowers.

Beautiful presentation of these lovely little carnivorous plants. So delicate, hard to believe they are carnivorous. Congratulations on your Feature. FL

Thanks Rita, the pink ones are my favourites

Excellent photo of these gorgeous flowers!

Thank you, they are very delicate

This is perfection Mik....congratulations on your recent features. L/F

So pretty Mik and a beautiful close up. l/f

Thank you Elaine and for the l/f

A beautifully captured beautiful flower, Mik! One I have never seen.

Thanks Bette, I love these little sun lovers, they are so light that the smallest breeze makes them a challenge to photograph