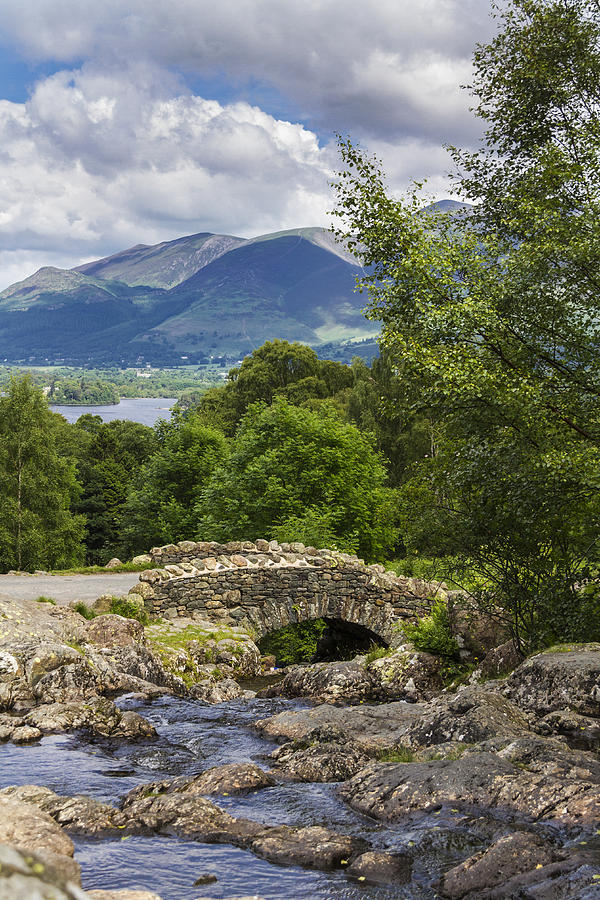 Ashness Bridge in the Lake District UK.
Ashness Bridge is a traditional stone-built bridge on the single-track road from the Borrowdale road (B5289) to Watendlath, in the English Lake District. It is at grid reference NY270196, and is famous for being a fine viewpoint across Borrowdale towards Skiddaw. It or its predecessor may have been a packhorse bridge conveying packhorse traffic from Watendlath to Keswick.
Near the bridge is a small cairn to Bob Graham, who ran a round of 42 Lakeland peaks in 1932 (in under 24 hours), a record which was not equalled for 28 years.

The Lake District, also commonly known as The Lakes or (particularly as an adjective) Lakeland, is a mountainous region in North West England. A popular holiday destination, it is famous not only for its lakes, forests and mountains (or fells), but also for its associations with the early 19th century poetry and writings of William Wordsworth and the other Lake Poets.

Historically shared by the counties of Cumberland, Westmorland and Lancashire, the Lake District now lies entirely within the modern county of Cumbria. All the land in England higher than three thousand feet above sea level lies within the National Park, including Scafell Pike, the highest mountain in England. It also contains the deepest and longest lakes in England, Wastwater and Windermere, respectively.

Thank you James for featuring my image in Beauty.

Thank you Judy for featuring my image in Landscape and Landmark Photography.

Thank you Jay for featuring my image in Amateur Photographers.

Thank you Don for featuring my image in I Wish I was There.

Thank you Chuck for featuring my image in AAA images.