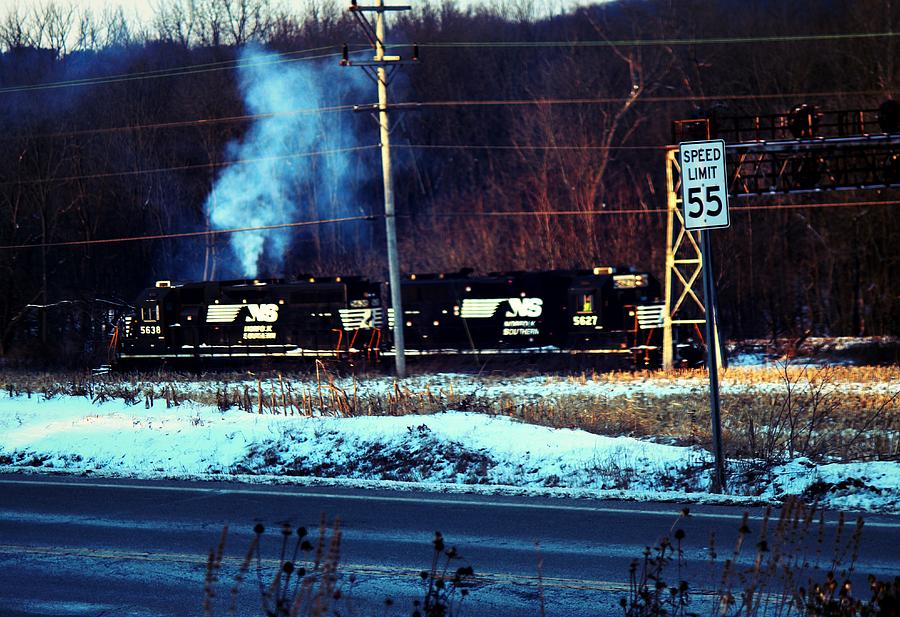 NS was created in 1982 from the merger of N&W and SOU, both profitable companies. The new company was given the name of the Norfolk Southern Railway, an older line, acquired by SOU in 1974, that served primarily North Carolina and the southeastern tip of Virginia. Headquarters for the new NS were established in Norfolk, Virginia. The company suffered a slight embarrassment when the marble headpiece at the building's entrance was unveiled, which read "Norfork Southern Railway". A new headpiece replaced the erroneous one several weeks later.

The merger aimed to compete in the eastern United States with CSX Transportation, formed after the Interstate Commerce Commission's 1980 approval of the merger of the Chessie System and the Seaboard System.
Conrail

Consolidated Rail Corporation (Conrail) was a 11,000-mile (18,000 km) system formed in 1976 by bringing together several ailing northeastern railway systems into a government-owned corporation. Conrail had become profitable after the Staggers Act in 1980 largely deregulated the U.S. railroad industry.

In 1996, CSX bid to buy Conrail. Norfolk Southern, fearing that CSX would come to dominate rail traffic in the eastern U.S., responded with a bid of its own. On June 23, 1997, NS and CSX filed a joint application with the Surface Transportation Board (STB) for authority to purchase, divide, and operate the assets of Conrail. On June 6, 1998, the STB approved the NS-CSX application, effective August 22, 1998.

NS acquired 58% of Conrail assets, while CSX got the remaining 42%, including about 7,200 miles (11,600 km) of track, most of which was part of the former Pennsylvania Railroad. NS began operating its trains on its portion of the former Conrail network on June 1, 1999, closing out the 1990s merger era.
Operations

NS is a major transporter of domestic and export coal. The railroad's major sources of the mineral are located in: Pennsylvania's Cambria and Indiana counties, as well as the Monongahela Valley; West Virginia; and the Appalachia regions of Virginia, Kentucky, and Tennessee. In Pennsylvania, NS also receives coal through interchange with R.J. Corman Railroad/Pennsylvania Lines at Cresson, Pennsylvania, originating in the "Clearfield Cluster".

NS's export of West Virginia bituminous coal, begins transport on portions of the well-engineered former Virginian Railway and the former N&W double-tracked line in Eastern Virginia to its Lambert's Point coal pier on Hampton Roads at Norfolk. Coal transported by NS is thus exported to steel mills and power plants around the world. The company is also a major transporter of auto parts and completed vehicles. It operates intermodal container and TOFC (trailer on flat car) trains, some in conjunction with other railroads. NS was the first railway to employ roadrailers, which are highway truck trailers with interchangeable wheel sets.

At the end of 2012, the transport of coal, coke, and iron ore made up 26% of the total operating revenue of NS, general merchandise (automotive, chemicals, metals, construction materials, agriculture commodities, consumer products, paper, clay, and forest products) made up 54%, and intermodal made up 20% of the total.